First trail race since December! Holy shit, has it been that long? 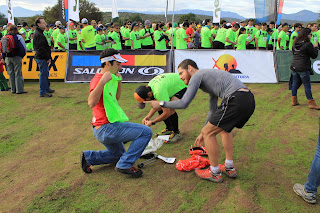 Arrived with seconds to spare. Here's Daniel and I getting help from Matias. We literally jogged from the car, put on the bibs and started the race all within about 2 minutes. 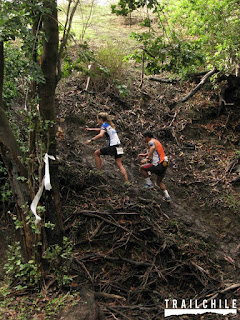 Some of the good, rooty parts that were mixed in with a lot of fast, smooth trail. Thanks to Matias for the awesome shots. 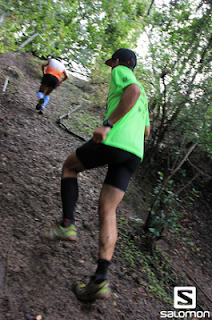 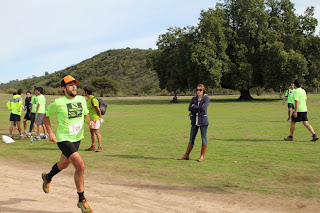 Finishing (or just "finished") Kick.
Check out the gangster, "one sock up/one sock down."
Thanks, Vanessa for the photos and constant awesomeness! 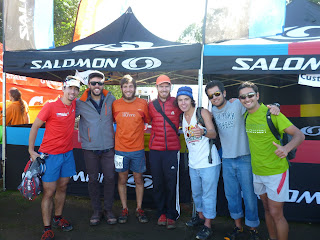 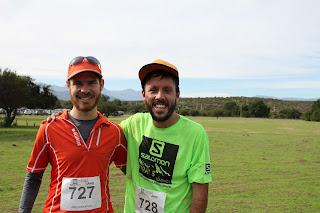 Beards in bloom. Daniel's got his winning eye on set on this beast next October.


Thanks again to Matias for filming. Literally, the trail/mountain racing scene in Chile would not exist as a "scene" if it weren't for his hard work. He's at every race. Every training run. Knows everyone.

This vid captures me towards the last 3K. I had just been passed and was not having that shit. I was doing everything I could to get that guy back. And I did. So, that's good and very nice and now I'm going to bed.

The official results will be up in the next day or so. I think I came in at about my usual standing, 5th or 6th (UPDATE: 5th place). The plus side is that I think I was only a few minutes behind the winner. So...for me...and all this horrible training I've been doing, I feel like this is a good indicator that I'm on the right track. During the race, I definitely felt like I was controlling the pace and effort of the racers around me more than vice versa. I could run uphill stronger than ever before and no one that I ran with (runners in 4th-8th) could run downhill faster than me by a long shot. So... there's some inspiration to be drawn from this race.
...Mostly, that I need to stop fucking around and being lazy and...when I have free time, I should think to myself..."Why the fuck do I have free time? Go train."

This blog post ruins every sentiment I just tried to convey.

Did you know they sell Jim Beam in little bottles that fit perfectly into your coat's chest pocket and if you use a straw, you can drink it from under your collar on the bus and no one will know?

Sleep well, True Believer. There is nothing in the world you aren't allowed to experience.

I also picked up a pair of these...
http://blog.runningwarehouse.com/tag/adidas-adios-boost/

...which supposedly won't come out for a few more months? But we have them in Chile right now. ....the adios zero...whatever the last versions were, were amongst the two best shoes I've ever owned. The Nike Lunaracer 2's being my all-time favorite.

Great to see you guys out and about doing some proper boss jogging.

Get your ass in gear PT. The Cruce is soon to come. I expect some proper Brojogging!

Great run on the weekend, Thunder. I think that you're going to be on fire this Saturday in Puteando.

Thanks for the mention of Augrabies.